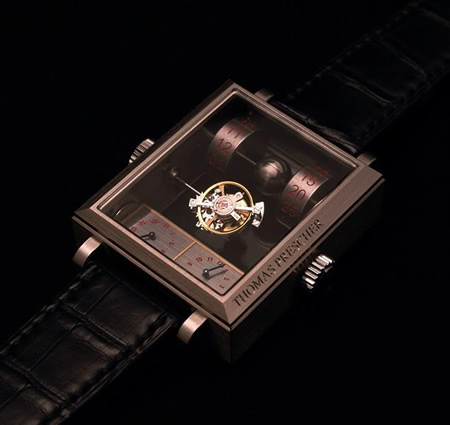 Telling time is getting weirder and weirder. From arty wall hanging clocks to funky wrist watches with all kinds of shapes and dials to this the the Automatic Double Axis Tourbillon teh time-telling biz has lost it’s mind. It sounds a bit like rocket science if you ask me or at least quantum physics, but this seriously odd wrist watch is nevertheless extremely fascinating. It’s completely transparent so you can actually see the inner workings of the device. If you thought those Swiss watches were complex, as simple as this one looks it’s anything but simple to fathom, although the time-telling part is simple enough. The designer, Thomas Prescher has created this masterpiece with a Tourbillon system. If this is as much a ‘D-uh’ moment for you as it is for me, what the ‘Tourbillon’ means is – a delicate mechanism designed to enhance accuracy by countering the effect of gravity when the watch is rotated on a wrist. The designer has actually managed to take even that complicated system up a notch by using a “flying double axis tourbillon,” which is apparently there to deal with ‘negating any gravity effects.’

If that isn’t rocket science I don’t know what is. But what’s more of a shocker is the ‘could be’ price tag on this watch, although there’s no official pricing it seems watches with this kind of motif can cost up to Half a Million Dollars. Holy heart stopper Batman!
Dvice