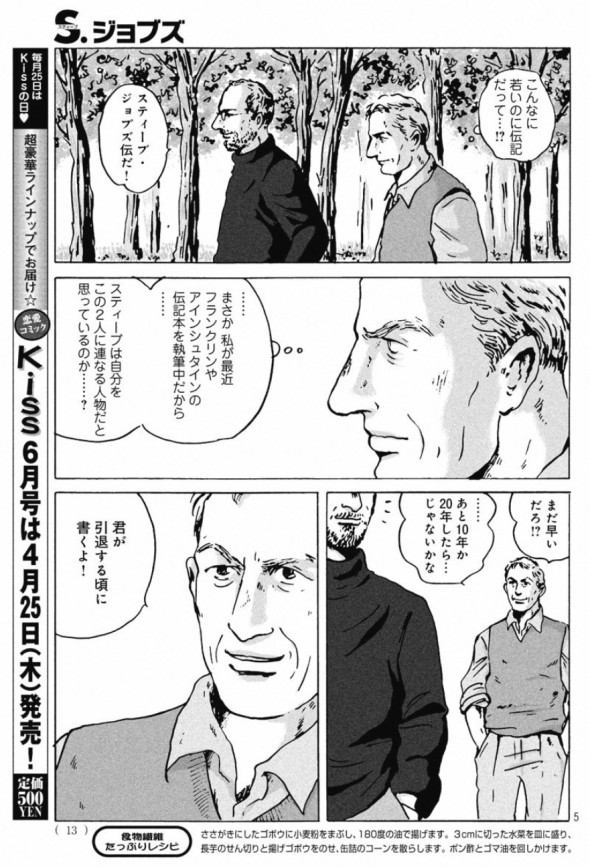 Few weeks back we came up with the news on a Manga Biopic on Steve Jobs by Kiss Magazine, well the first chapter of the biopic has gone on sale. Japanese Manga publishing house ‘Kodansha’ released the first images of the biopic titled “Steve Jobs,” which were subsequently posted to Yahoo Japan’s online bookstore, as its first chapter hit stores yesterday in the April issue of the company’s Kiss magazine.


The biopic is an official adaptation of Walter Isaacson’s authorized biography. The comic is made by the famous manga artist Mari Yamazaki. The first panel is used by the artist on how he plans to tell the tale of the late Apple co-founder.

The Biopic is set from Isaacson’s point of view and begins in 2004 with Jobs asking the biographer to pen his life story. He waits to start work in earnest until Jobs’ wife Laurene breaks the news that the tech guru is in the late stages of pancreatic cancer. The remaining panels show Isaacson describing his first impressions of Jobs, an early interview session, and background that sets the stage for the manga’s coming installations. The Biopic will continue next month in the next issue of Kiss.