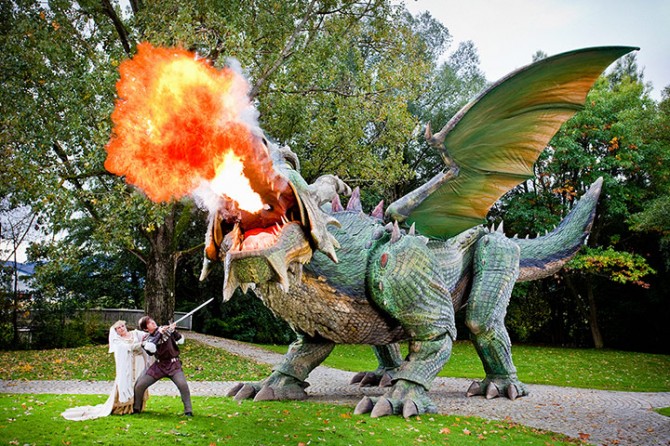 After the blockbuster movie ‘Jurassic Park’ hit the screens in early 90’s, theme parks with robotic dinosaurs became quite a rage. But the novelty quickly faded off. Behold a new massive 11-ton robo-reptile that has made its way into the 2014 Guinness World Records. Nearly 30-feet tall robot guised as a dragon has become the world’s largest walking robot. Named ‘Tradinno’, which is a mash-up between ‘tradition’ and ‘innovation’, is the brainchild of a Germany’s Zollner Elektronik AG.


The 50-feet long mechanical dragon can walk, flap its wings and can spit and breathe fire. And did I forget Tradinno can also bleed! Polyurethane and glass reinforced plastics skin has veins that bleed 21 gallons of stage blood on cue. The four-legged monster is powered by a 2.0-liter turbo diesel engine and is controlled by a collection of very complicated systems.

Tradinno is a part of Germany’s oldest folk play named ‘Drachenstich’ which is performed each August in the Bavarian town of Furth im Wald. It might not look real-enough but definitely is one impressive machine!