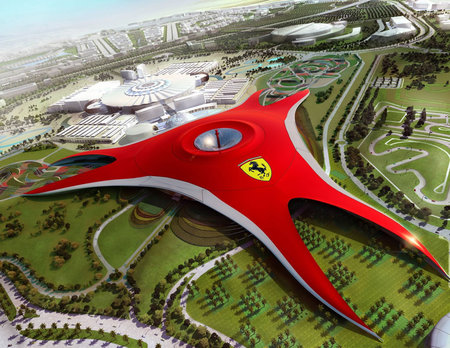 There isn’t a self respecting male out there that would not have some measure of respect for the Prancing Horse aka Ferrari. Their cars have been coveted by many a driver and that isn’t going to stop as long as they continue to deliver the performance like they have been doing for all these years. And who can argue with the styling. Of course this premium brand automobile manufacturer may not able to curb its prices for the average Joe but it appears like they have come up with a solution to keep potential and future customers very interested. A theme park in Adu Dhabi called Ferrari World is in the works and will feature what they’re saying will be the world’s fastest roller coaster and plenty of other themed rides to keep fans on the edge of their driving seats.

The theme part which is scheduled to be opened sometime in 2010 will also be the world’s largest indoor theme park that’s designed to look like the double-curve body shell of a Ferrari GT car. It will house under this uniquely styled roof, more than 20 rides and attractions. Hope fully the price of admission won’t be the cost of as premium as the cars.
[Techeblog And Yasisland]