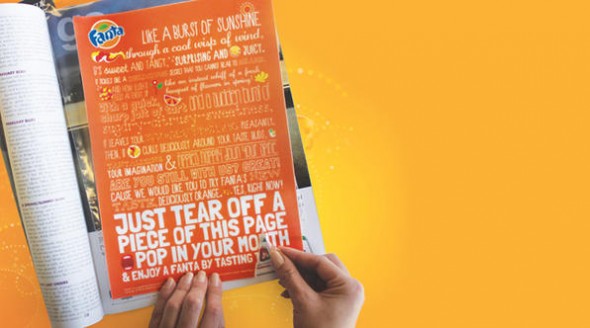 Fanta has its set of followers in the West but when it comes to promoting it through the Middle East, the company has left no stone unturned. They have gone on to introduce an edible print ad in a range of Middle East lifestyle publications, thus promoting the new improved taste of Fanta. Now, consumers can try it out by popping a piece of the paper into their mouths. Positioned as ‘deliberately orange’, the instructions make it clear that the paper is edible to full effect. It goes without saying that the ad campaign was a massive success and went viral soon. A protective sleeve ensures that the paper is hygenic for consumption and holds the essence. That’s not all. Fanta has also installed special motion sensor-enabled retail displays that dispense an orange aroma and play audio messages when people near them. It has also created an app on the Fanta Middle East Facebook page that invites “consumers record a ‘slurping’ sound to virtually drink the luscious orange liquid as it fills their computer screens and compete with friends online.”


Tarun Sabhlok, Group Brand Manager, Flavors, Coca-Cola Middle East said, “Fanta is all about bringing back play to seemingly boring situations where it has evaporated. With the launch of our new orangey taste, we wanted to create a multisensory experience people would remember and want to share with their friends.” This novel idea reminds us of a notable mint chewing gum campaign that had folks savoring parking tickets which were so flavored.