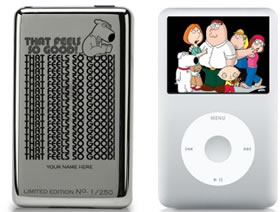 A must have die hard Family Guy fans. Available for a limited time this 160GB iPod costs $439, $90 more than the stock iPod and has Brian scratching his butt saying “That Feels So Good” etched onto the back of your iPod. Each one of these babies are etched with licensed art from the Family Guy camp and individually numbered. Only 2000 pieces are made and they would come in two color variations, black and silver. Oh and Season 7 premiers September 28 starting with ‘Something something dark side’ which will be a parody of Star Wars Episode V: The Empire Strikes Back. Season 7 looks promising with Simpsons. I am particularly looking forward for this one –
6ACX18 “Family of the Future” [Family Guy and Futurama crossover]: Stewie invents a time machine to see if he rules the world in the future. However, the system starts to malfunction, and sends the whole family into the 30th century, where they meet the characters of Futurama. Meanwhile, Stewie befriends Bender and they become pals, but turns Stewie into a robot.
Check the Season 7 line up.