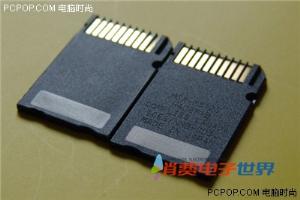 Counterfeit technology go back when overclocked Pentium II processors were available as factory clocked CPU’s from not so reliable merchants. The trend continued and today we have everything from fake iPod’s to fake Motorola RAZR. Sony is facing a grave problem of counterfeit Memory Sticks from China which have made their way to USA and Canada. Seperating the fake from the real is not easy as even Sony reps are unable to tell the difference. On the outside genuine Memory Sticks Duos have laser-etched information on the back of the cards compared to the printed information on the counterfeits. The dimensions between the two are also slightly different as some PSP users have complained of inserting and removing the MS Duo.
(Pictured is a Printed and Etched Memory Stick)

The main problem with counterfeit Memory Sticks is that they are unreliable so one fine day you will find all the data in your 1GB Stick gone. It is advisable that buyers should purchase Memory Sticks from reputed stores and avoid purchasing from Ebay as most Memory Sticks being sold on eBay are manufactured in China and are not the genuine Sony says a popular Ebay merchant.
Source