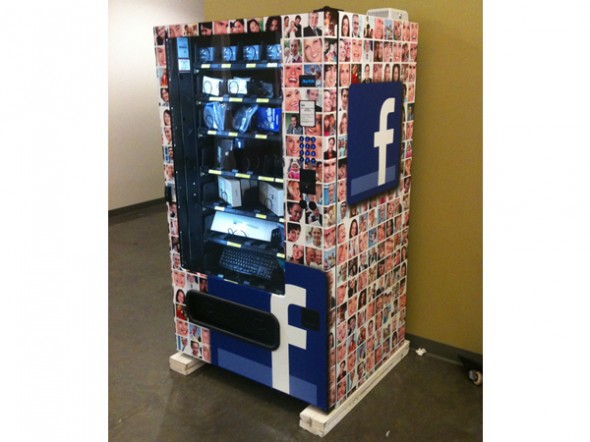 Facebook’s offices frequently feature in different magazines as one of best places to work, the company’s idea is to make the work environment ‘fun’ for its employees through its unorthodox and quirky ways. Latest addition is a vending machine that dispenses computer accessories rather than usual snacks and soda. The ingenious idea came from Facebook’s CIO Tim Campos who is known for his out of the box innovativeness. For a tech company, replenishment of computer accessories is very essential and has to be done quickly, the usual route through IT-department and truck load of paper-work makes it tedious and slow. An iPod dispensing machine at an airport witnessed by his assistant became the basis of the whole idea. Campos gave it a go-ahead and work began to build a custom-made vending machine could dispense computer accessories to Facebook’s employees. 6 weeks worth of work along with the manufacturers gave its employees the ease of grabbing a replacement accessory with a simple swipe of ID-card. Palo Alto, Facebook’s headquarter, got the first lot of the rectangular-spectacular machines.


According to Campos, it not only simplifies the process but an effective method of cost reduction by putting a check on pilferage. Facebook was able to cut down the accessory replacement cost by 35%. “Now 100% of employees have to badge in, and there’s better accountability on what people are taking,” says Campos. “More importantly, it’s just cool. Employees love to see these machines.” Three machines have been installed till now and Campos says if all goes well Facebook’s new headquarters in Menlo Park will soon be fitted with two vending machines on each floor. And future machines could also dispense higher-value items like phones and PCs.