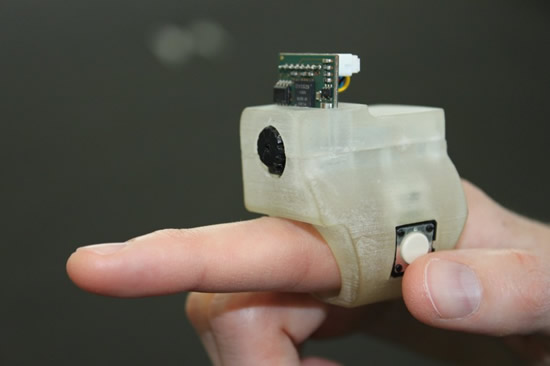 Visually impaired have never had their share of photography, they have remained aloof of colors and picturesque environment, this until a team of researchers from the Fluid Interfaces Group at MIT’s Media Lab brought them a finger-worn device they call the EyeRing. The EyeRing is a camera enabled ring that helps the visually impaired focus on an object, capture it and then hear feedback about what they just captured.


According to the developers the EyeRing, which offers auditory feedback via a wearable device, can work both as a navigation tool and as a translation aid for the blind. Made using 3D printing technology, the augmented reality ring is equipped with a small VGA camera, a processor, a Bluetooth radio module and a mini USB port for charging.

Powered by a 3.7V Li-ion battery the EyeRing that can easily function on a click of a thumb-activated button on the side can identify price tags, colors, currency and text etc. The EyeRing can also determine distance between objects by comparing two captured images and can also create 3D maps of the surrounding area for the blind to navigate the space easily. The ring sends the snapped images to Bluetooth connected Android phone where from the user can hear what he has captured. The team of developers is also working on an iPhone app to get the EyeRing working with the iPhone too.