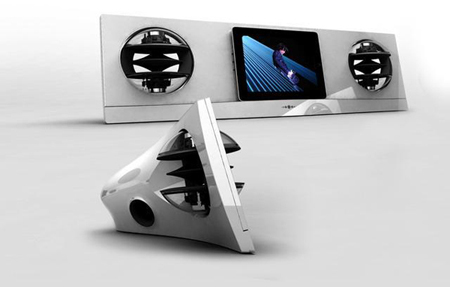 iPad docks tend to stick to those silly old boxy designs with designers preferring to keep their creative genius latent. Well, we stumbled across an iPad dock that simply climbs over the heads of many and reaches up as probably one of the best dock designs we’ve come across. Called the AeroPad Two for reasons unknown, given that it simply doesn’t seem to fly, this one’s large, thrice as large as your iPad itself! Designed by Jean-Michel Jarre, this one plugs onto both, iPads and iPods and comes with a 30-pin dock connector, four 30-watt speakers, an 80-watt subwoofer, integrated USB port and WMA, AIFF, WAV and MP3 file support.

Priced at nearly $924, this one’s a wallet burner for sure, though it seems to be capable of satisfying the needs of most audiophiles around.
[technabob]