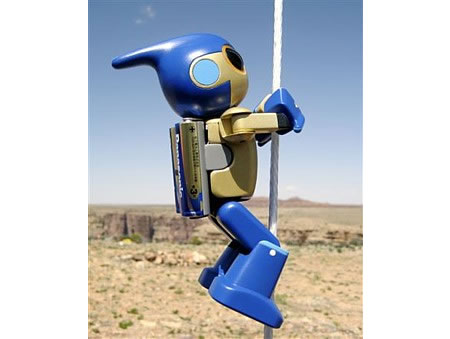 In a well orchestrated publicity stunt, Evolta robot, the mascot of Panasonic Evolta battery scaled a 500-meter cliff at the Grand Canyon. The 17-centimeter tall, 130-gram bot tried to prove its prowess and the endurance level of the Evolta AA alkaline battery. The Guinness Book of World Records recently recognized it as the longest-lasting of its kind. A pair of Evoltas powered the robot to climb up a 530-meter length of rope suspended next to the cliff. It reached the top after 6 hours and 45 minutes.
Source