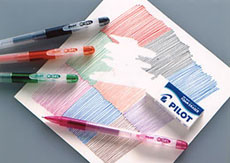 Everybody has made their share of spelling mistakes, but when you write with a pen, there isn’t much you can do about it with the exception of white-out, which doesn’t look neat on paper. Pilot Pens Japan has developed a pen which acts like a pencil. By using a special water-based gel ink that doesn’t infiltrate the paper, the writing can be erased with an ordinary eraser. It’s available in eight colors. It costs around 125 Yen ($ 1.20)