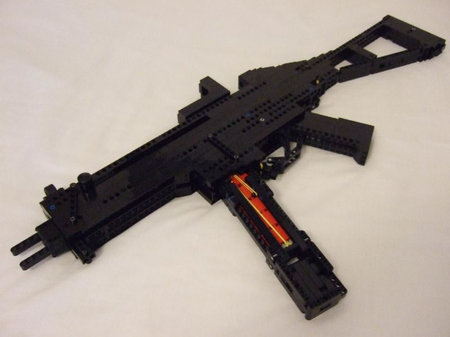 A while back we had a list of “The 30 coolest Lego creations” which was cool enough, but who knew you could make a machine gun using just Lego bricks? This is positively Epic! And its exactly what a Lego fan from an unofficial Lego creators website has done. The HK UMP 45 machine gun has a complex working mechanism and is able to shoot Lego brick bullets. It features a cocking handle, folding stock, detachable reflex sight, backup iron sight and two massive 15 brick magazines. This has to be one of the coolest and most creative use of Lego blocks, not to mention difficult. For more on how to make your own Lego gun you can visit the creators page and watch a demo video after the jump.