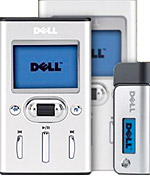 The magic of direct selling failed to work for Dell’s ailing line of MP3 players as the last of which have quietly disappeared from the company’s website. The DJ Ditty, a flash memory-based player that competed with the iPod shuffle, was the last player offered by Dell after the company discontinued its hard drive-based line of DJ players in February. Try ordering a DJ Ditty on Dell’s DJ Life website and you will end up in error pages and broken links. The company’s online store now only sells media players from Sandisk, Samsung, Creative, Archos, and iRiver.