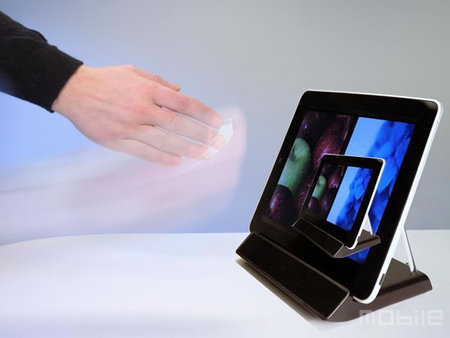 Elliptic Labs to Unveil Touchless Dock for iPad at CES 2011

At the 51st IFA Berlin Trade Show, Elliptic Labs introduced the world to their Touchless Gesture User Interface technology which gives the user the ability to controls their gadgets by simple hand movements. For CES next month, they are ready to sweep the Apple fans off their feet with their Touchless Dock for iPad.

Though yet in the prototype stage, this device looks promising enough to change the way we think of docking stations. A “touchless zone” is created around the device with the help of ultrasound technology. The umbrella of the zone will extend to approximately one foot in front and to the side of the iPad’s screen. Elliptic Labs Head Honcho Stian Aldrin suggests that this touchless feature will be proven extremely handy when one cannot operate their device owing to wet or greasy hands in the kitchen.
The dock seems to have preference for iPad but the folks at MobileMag believe that other tablets will be eventually integrated into its functionality owing to the hardware and sensors being “off the shelf components.”