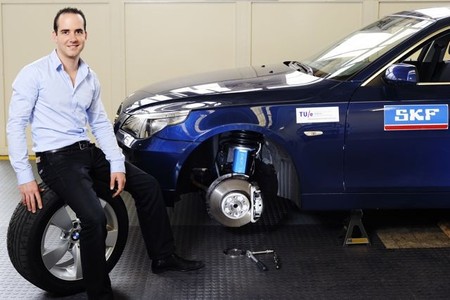 Electromagnetic automobile suspension for a Bentley like ride in your Jetta

The Netherlands’ Eindhoven University of Technology have developed a tech which can revolutionize cars as we know them. The Eindhoven suspension as it is called is not only electronic but also active, it is connected to a variety of sensors and accelerometers via an onboard computer which adjusts the suspension as per the road conditions within a fraction of a second. Though active suspension has been around on hydraulic systems since quite some time now, but Eindhoven researchers say hydraulics cant match the speed of an electromagnetic system.

About the same size as a conventional shock absorber, the system consists of a passive spring, an electromagnetic actuator, a control unit and batteries. The spring – appropriately enough – provides springing action, while the magnets provide passive shock absorption. If the batteries should fail, the system will still work as a purely mechanical suspension.
With a peak consumption of 500 watts, the suspension uses about a quarter of the power of hydraulic systems. It also stretches its battery life by using road vibrations to generate electricity.
The company tested the system on a simulator and claims that it offers a 60% ride improvement. Eindhoven University developed the system in collaboration with Swedish mechatronics company SKF, which has patented the technology and is looking into marketing it.