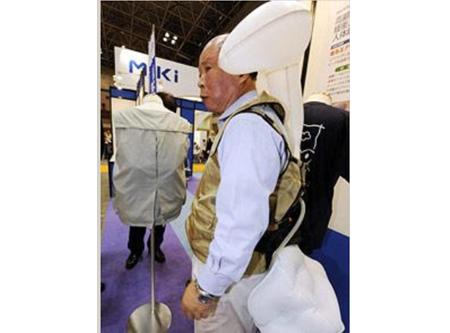 Elderly Airbag to cushion those falls when no one is around

A Tokyo-based company, Prop, has displayed a product, which is designed to cushion a fall using two separate pockets of air. The airbag has been designed keeping the elderly in mind with epilepsy, who were particularly vulnerable to sudden – and dangerous – falls. The device is strapped around the body – giving protection to the head and hips. The airbag can inflate in 0.1 seconds if it starts moving quickly towards the ground, one pocket will be behind the head and the other around the hips. However, the cushions that suddenly inflate only work if the fall victim slides backwards. It does not protect those who fall forward. The cushions weigh 2-and-a-half pounds each and are tied around the waist; electric sensors, which can feel a sudden movement, activate them. As soon as the alarm is set off, 15 litres of compressed air are injected into the inflatable pads – puffing them up to protect the most vulnerable parts of the body.

The airbag has been unveiled at the International Home Care and Rehabilitation Exhibition in Tokyo. The steep price of $ 1,250, could keep most pensioners far away from this nifty little gadget.
Source