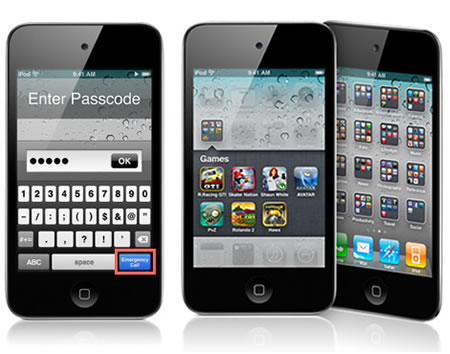 The new iPod Touch is packed with new goodies making those who went out and spent so much money on the previous version cringe with buyer’s remorse. If the image that’s floating around is true and like 9to5mac.com says, is not a Photoshop error by some sleepy Apple design guy (the company’s getting quite lax these days, loosing prototypes and all), then it’s quite possible the iPod Touch 4Th Gen will have emergency VOIP calling. Of course you will have to be in the vicinity of a Wi-Fi hot spot. Nevertheless, Apple hasn’t pointed this out in the official specs for the device or FaceTime so we’ll just have to wait and see.

They also managed to find yet another error in the official pictures of the device. The rear iPod Touch has a green phone icon that’s just about visible. C’mon guys, it’s a bit of a big deal to be messing up official device images.
[9to5mac]