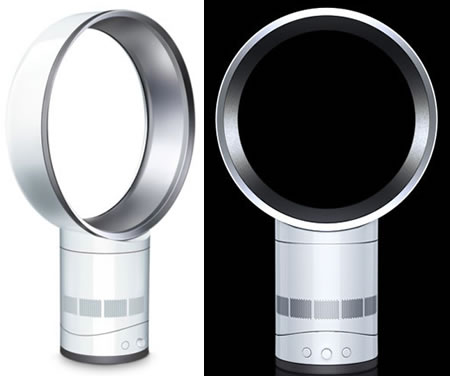 While air conditioners are taking a more important role in the lives of many these days with global warming and heat waves, the traditional fans aren’t yet going out of fashion. Dyson thought why not come up with a unique idea and design and get people to start noticing the cost-effective, conventional method of cooling – fans. This one though, has no blades and looks like a huge ring. The Dyson Air Multiplier Fan uses the technology from the company’s ‘bag less vacuum cleaners’ – in more clearer words, the fan draws air is drawn into the base and forces it up into the loop amplifier. It is accelerated through a 1.3mm annular aperture, creating a jet of air rotates around the airfoil-shaped ramp. While exiting the loop amplifier, the jet pulls air from behind the fan into the airflow while at the same time forcing the surrounding air from the front and sides of the machine into the air stream amplifying it 15 times. After all this science, you get some decent air.

The cost for this super cool fan is as super as its functions – $300. So now we know that fans are becoming antiques soon – the price explains that.
[Pocket-lint]