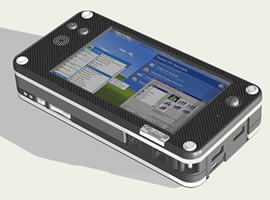 Take a look at the DualCor’s specs it is the fastest PDA with a 1.5 ghz processor. It has a large and bright 5″ touch screen LCD with a resolution of 800 x 480 pixels. It has a 1 GB of DDR2 RAM, 1 GB NAND Flash memory and a mammoth 40 GB hard drive. It has dual OS Windows XP Tablet PC Edition and Windows Mobile 5.0. which runs on a seperate Intel chipset thus giving you the best of both worlds. You can run any XP compatible application as well as any Windows Mobile 5.0 compatible app. It has 3 USB 2.0 ports, Mini VGA port to connect to External monitor, Microphone, Stereo out, Compact Flash II slot for memory expansion, telephone headset port and a Speaker. It is not known if the DualCor has Wi-Fi or an Ethernet Jack.