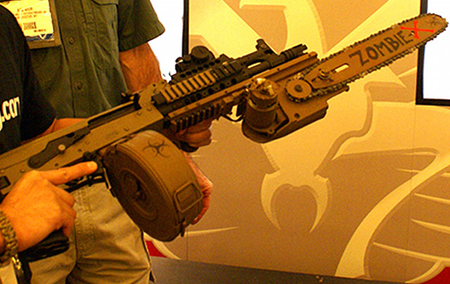 If your zombie paranoia has begun to blow out of proportions lately, here’s the perfect tool to soothe your strained and fidgety nerves. Called the DoubleStar Zombie-X AK-47, this assault rifle is good enough to make zombies scatter away in hordes and could pretty much put most of those weapons we see in splatter films to shame. Complete with a battery-powered chainsaw to saw off all that’s left of your zombie victims, the rifle also sports an EOTech Zombie Stopper XPS2-Z Holographic Sight (these guys sure love them long names) that puts a biohazard symbol on your target instead of the conventional red dot of death. Priced at $1,249.99, this weapon of mass destruction could be your savior, if the world does succumb to a zombie apocalypse.