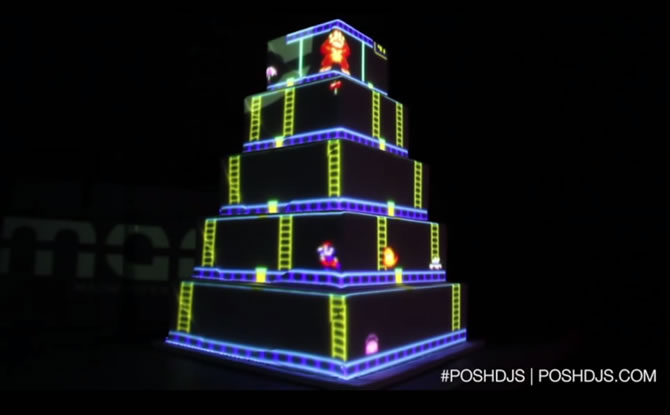 This one’s for all the gamers who’re looking to get married soon and want a kick-ass centerpiece for their wedding reception. If a video game themed wedding is on your mind then a New Jersey based company named ‘Posh Entertainment’, that supplies DJs and lighting to weddings and other events, is the place you should be heading to as it can deliver the perfect wedding cake for the occasion. Over the years we have seen a lot of painstakingly crafted video game themed cakes, but this one steals the show from the rest. It’s a fully edible multi-tier cake that you can also play video games on, does it get any better than this! See the video after the jump to watch Mario hop up and down the tiers of the cake.


The cake seen in the video was made by catering company Meals For Reals and is named Donkey Kong Projector Wedding Cake. In addition to Donkey Kong, other classic games such as Super Mario, Sonic, Dig Dug and Pac Man are projected on the sides of the cake. The projection mapping, which is the most integral part of the whole setup, is handled by Posh Entertainment and another company named Invader Visuals. On the list of geekiest wedding cakes, we’ll undoubtedly rate it the highest.