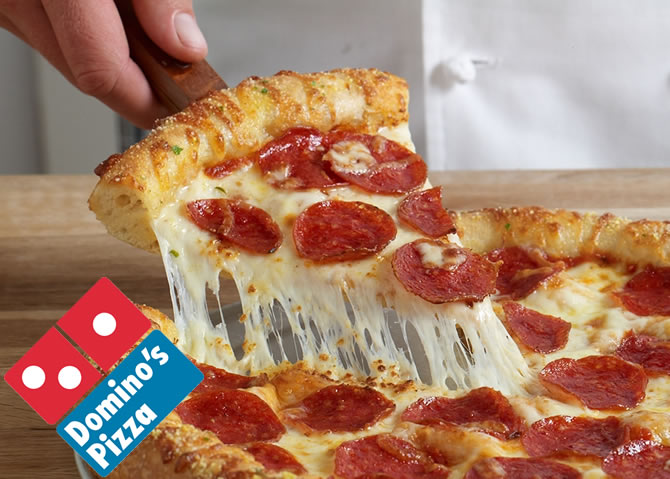 Domino’s from then to now

Domino’s Pizza is an American restaurant chain and international franchise pizza delivery corporation which is situated at the Domino Farms Office Park in Ann Arbor Charter Township, near Ann Arbor, Michigan. The campus is owned by Domino’s Pizza co-founder Tom Monaghan and Domino’s Pizza was founded in 1960. It is the second largest pizza chain in the US after Pizza Hut. But it is the largest chain worldwide with more than 10,000 running corporate and franchised stores in 70 countries. It changed ownership in 1998 when it was sold to Bain Capital and the company went public in 2004.

The early years of the company started of like this – In 1960, Tom Monaghan and his brother, James, purchased DomiNick’s, a small pizza store in Ypsilanti, Michigan, near Eastern Michigan University. The deal was secured by a $75 down payment and the brothers borrowed $900 to pay for the store. In 1967, the first Domino’s Pizza franchise store opened in Ypsilanti

The present Domino’s menu has an assortment of Italian-American entrees and side dishes. Pizza is the main focus, with conventional, specialty, and custom pizzas presented in a mixture of crust styles and toppings. In 2011, Domino’s initiated artisan-style pizzas. Other entrees include pasta, bread bowls, and oven-baked sandwiches. The menu presents chicken side dishes, breadsticks, as well as beverages and desserts.

Begining in 1973, Domino’s Pizza had a promise that customers would get their pizzas in 30 minutes of placing an order or they would be given the pizzas for free. In India the guarantee is for 300 and is applicable for an order of less than 4 pizzas.

Jubilant FoodWorks Limited (the Company) is a Jubilant Bhartia Group Company, The Company was integrated in 1995 and started operations in 1996. The Company and its subsidiary operates Domino’s Pizza brand with the private rights for India, Nepal, Bangladesh and Sri Lanka, The Company is India’s chief and greatest increasing food service concern, with a network of over 500 Domino’s Pizza restaurants

Domino’s considers that when a box of pizza is opened, family and friends jointly share the pizza. Hence, the brand positioning: ‘Yeh Hai Rishton Ka Time’

The Israeli Domino’s Pizza franchise initiated the idea selling vegan pizza on Monday, making the country the foremost in the world where the company is selling the product.
The move followed a Facebook campaign by the Vegan Friendly website that offerss information on restaurants and caterers who present dishes that don’t use animal products. The campaign received immense popularity.

Domino’s a company that has received love all over has had to slightly alter its menu according to the culture of the country. It has had to come up with novel advertising ideas like the Domino’s coupons codes mentioned above. But all these small alterations have only worked in the growth of the company and brand Dominos.