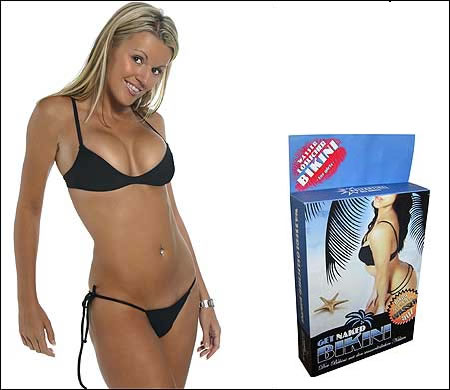 Dissolving bikini as a vengeance gift for heartbroken lovers

When vengeance gets into the head, you won’t think much about humanity or character. For such people gifts such as these will be amusing and will increase sales. The Get Naked Bikini is what I am talking about. It is a dissolving bikini invented by some German company. It looks like your typical swimsuit… only that after a dip in the water, you will come out as eve. Yeah, spark naked. This is supposed to be a gift idea for guys who have been dumped by their girls to embarrass the crap out of them in public beaches or pool sides. This proves that the inventor was dumped and who would blame the girl? His wicked and perverse mind would have been one reason for her to dump him.

Women’s activists are obviously fuming, but that isn’t going to stop many pranksters from having a little fun. Now this is where we need to warn the ladies – do NOT take a bikini as a gift. If you do, have a wash first and THEN if you still have it in hand, wear it. Else, buy worms and stuff it in trouser pockets so the men will have something to play with. Or frogs stuffed in the crotch somewhere, which would be funny.
Via – [Gizmodiva]