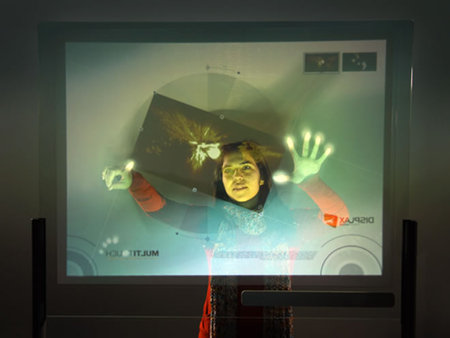 Displax a super thin film makes touchscreens of everything, a little touch here a touch there

This is the era of the touchscreen. From mobile handsets to PMPs and audio players, computers (tablet technology is this year’s trend) even remote controls, are all touch enabled. One of the only mainstream consumer technologies that somehow haven’t managed to be included in this genre of devices is the Television. It may be a bit odd but let’s face it that’s the reason God made the remote control. A touchscreen would only mean one would have to physically get up and go to the TV to do anything. However a company called Displax has been working on a technology that enables normal televisions to move into the touchscreen phase with the help of a simple film that needs to be applied to the screen.

The film is designed to detect up to 16 fingers on a 50-inch screen and while I don’t see the practicality of this with regards to TVs I have to applaud the technology in general. This could also be used on monitors or any other devices that aren’t touch sensitive and that’s a good thing. For now I’ll stick to my trusty remote thank you very much.
[Ubergizmo]