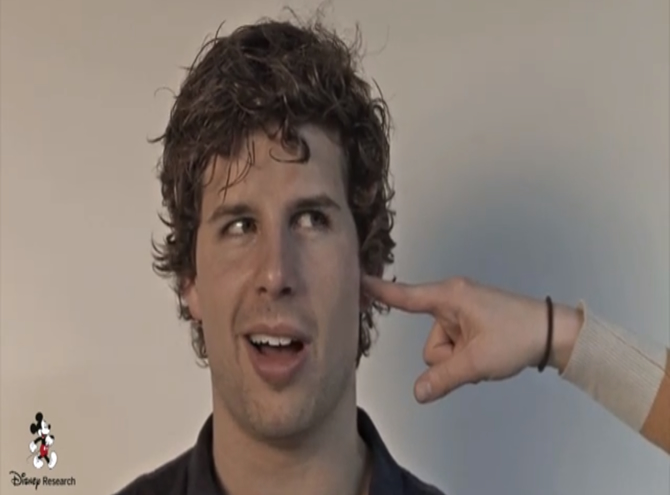 Transmitting a thought or a sound to someone else through a touch might sound like a gimmicky shot out of a sci-fi flick, but believe it or not, Disney research has come up with a technology that can exactly do that. Named ‘Ishin-Den-Shin’, which in Japanese means ‘what the mind thinks, the heart transmits’, is an organic speaker technology developed by Disney Research in Pittsburgh. The technology helps transmit sound from one person’s body to another person’s ear through a touch. It closely resembles bone conductive technology which has been with us for quite a while but for the first time the sound is transmitted through a person’s finger.


The installation consists of a Shure 55 microphone that is connected to a computer’s sound card. The audio signal is recorded and converted into a high voltage, low current (<300 Vpp, <50 uA) inaudible signal. The signal is then transferred to the person with the mic, who then transmits it on to someone else through a touch of a finger on the ear lobe. The signal can be passed to multiple people before it’s directed to someone’s ear.
The video explains the working of the whole technology. Disney however hasn’t commented on how it’s going to integrate the new technology into its products. But we think the technology will soon find its takers. Smartphone headsets can use this technology. Rather than holding the phone next to the ear, just pop a finger next to the ear and voila! Things will be a whole lot easier.