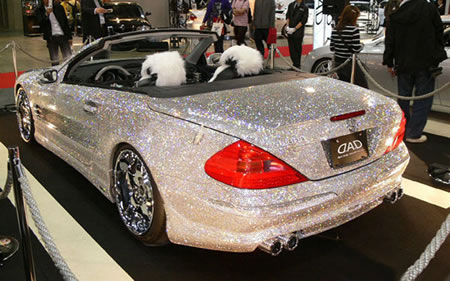 A Merc convertible does turn heads but when you have a flashy, glitzy, diamond covered Mercedes SL class you halt the traffic. The SL legend began over 50 years ago and to celebrate 50 years the limited edition Mercedes-Benz SL550 was announced. Coming back to the diamond covered Mercedes SL it was on display in an overseas auto show. No confirmed report on the diamonds being real or fake; this dazzling beauty would anyways be costing millions even if fake diamonds are used.

No idea on the pricing or availability but we do think that Paris Hilton might be interested.
Via – Luxurylaunches