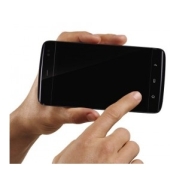 Dell’s tablet, the ‘Streak’ available at $500 this July

How cool can it get when Dell decide to jump in betweek HP and Apple, not to calm down the waging monsters but to challenge them both with their interesting new table called the ‘Streak’. Now the specs are what make it a total winner. It is powered up by a 1 GHz Snapdragon processor, a 5 megapixel camera, a 5 inch capacitive touchscreen, an additional front camera for video chats, microSD memory expansion to 32 GB, 3G and Wi-fi. Yeah, I’m thinking what you’re thinking. This one’s more of a hybrid between a tablet and a smart phone. Never mind, atleast Apple has a tangible competitor in the market. And oh, this one also has a SIM card slot for those who want to make calls from their ‘tablet’.

A cost price of $500 may be something that will draw people (seeking a complete tablet) pick the iPad instead of this one. Expect it in July.
Source