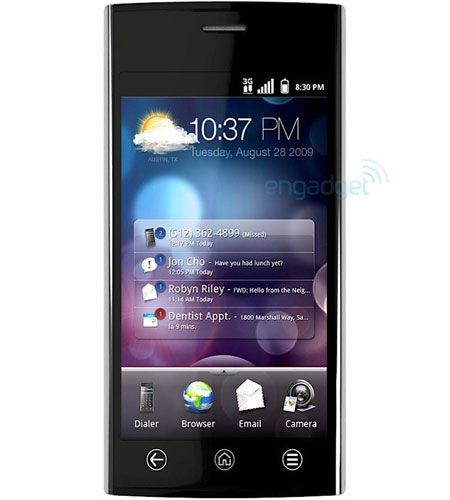 Dell’s initial handset the Mini 3i was super sleek but seems like it was destined for just the far-east markets and it slowly moved westward. After probably realizing that this was not a good plan since the world’s Android craving is increasing, Dell is now gearing up to announce the Dell Thunder, their second Android smartphone. The Thunder (hmmm… what would the BlackBerry Storm say to this?) is a high-end device that features a 4.1-inch touchscreen display (OLED, 800×480 pixels). The leaked details seem to talk about vague features like creating and editing high-quality content. I think this could mean capturing media on the built-in 8MP camera (presumably that’s able to capture data in HD) and allowing users to edit the same on the handset. Also mentioned was something called ‘curved glass’ which could pertain to the display or the body structure like Sony Ericsson’s Human Curvature design form. The new-age virtual keyboard called Swype will also be incorporated. 3G and Wi-Fi will also be available for speedy social networking.
[Ubergizmo]