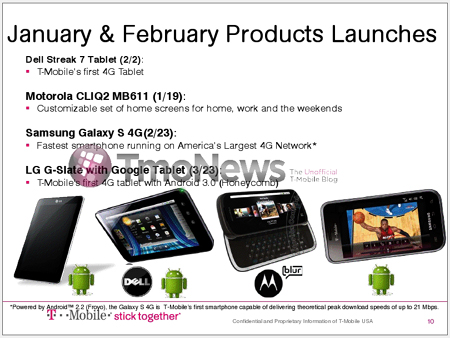 So it is written: the Dell Streak 7 and the Galaxy S 4G will be rolling in around February. The phones will be anticipated by those who are looking forward to some Android niceness. Packed with HSPA+ 3G support, the Dell Streak 7 will be coming in early next month and is to be hailed as T-Mobile’s first tablet with 4G capabilities. Another tablet that we may be seeing more sooner than later is the LG G-Slate that comes in with Honeycomb. Following up in the rear is the much loved Samsung Galaxy S with the all-new 4G avatar. Now, that’s something cool enough, to follow the Motorola CLIQ2 MB611 with customizable home screens for home, work and more.

Sure as hell, T-Mobile is on a roll. The Dell Streak will be out on February 2nd for $300, on contract, after rebate.
Engadget