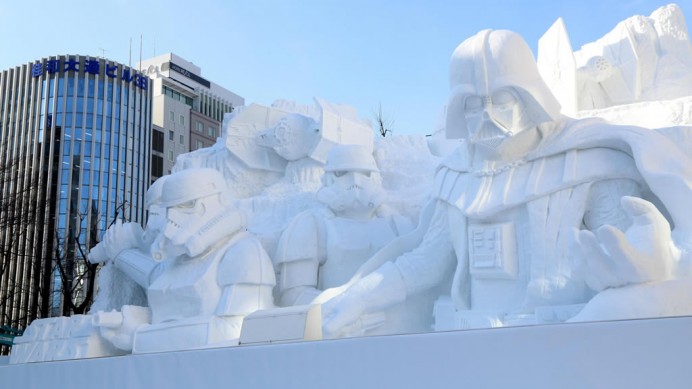 Darth Vader goes to the light side of the “force” in a 15 meter high Star Wars snow sculpture at Sapporo’s Odori Park, Japan

In a land far far away, a rebel force set plans in motion to enthrall visitors in their part of the world bay taking on the Sith Lord Vader. The stage was set in Sapporo’s Odori Park in Japan where the winter wonderland was transformed into a museum, of sorts, showcasing art and sculptures of varied kinds. But for the intrepid squad of Japan’s Ground Self-Defense Force’s 11th Brigade, the challenge was still underway as Lord Vader, the right hand of the Emperor, was mounting his dark image in attack upon the towering white snow.

As part of the annual fanfare in this region of mystical Japan, snow sculptures are common at this time of the year. The 11th Brigade’s entry into this year’s event is a rather detailed rendition of Sci-Fi’s favorite bad-guy, Darth Vader with his vehicle of choice i.e. a Tie fighter, a couple of his evil Storm Trooper cronies and even a Death Star. Officially endorsed by Lucasfilms as part of the pre-movie publicity for the upcoming Episode VII of the famous saga (releasing later this year), the sculpture rose high and mighty above the crowds and although not his color of choice, Vader does look pretty good in White (don’t tell him I said so). Disney, the parent company and distributor, was on hand to help supervise the sculpt that stands at a massive 15 meters in height and 22.66 meters in width. As of now this is one of the largest sculptures at the park.

Overall the project took about a month of work from a 2000 man team and 700 trucks of snow. And to make the event even more exciting for the few hundred fans that made it out in -3 degree temperature, Lord Vader made a personal appearance along with a small squad of troopers. What a sweet guy.