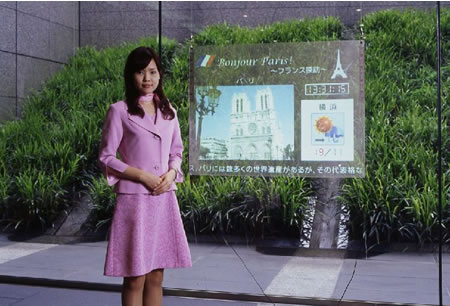 Dal Nippon printing Japan has unveiled a Transparent Projector Screen that delivers sound directly from the screen itself. It has an embedded speaker technology “SoundVu” developed by UK based Nxt Plc. The latest model coats a projection film on a surface of an acryl screen panel with a thickness of about 2 mm, and features SoundVu vibration modules on each side of the screen’s upper area. These modules decode audio signals input to each channel from outside and deliver sound. The screen panel is supposed to be hanged up when used. The company claims that sound can be heard from any direction around the screen as the speaker system has almost no directivity.