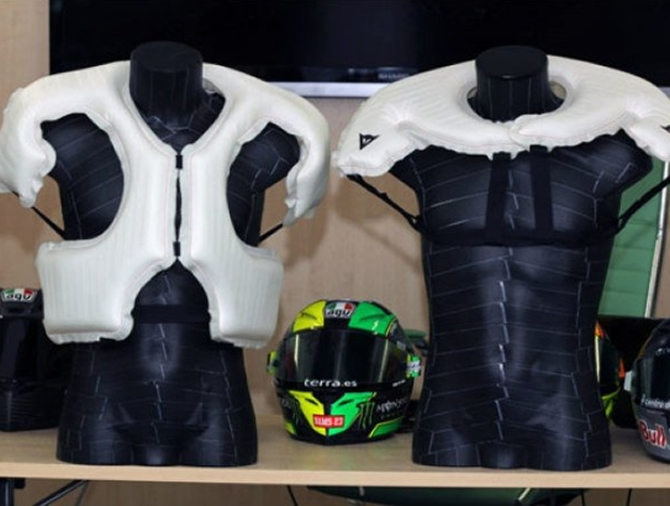 Where would one possibly stuff an airbag in a bike? Well, on the rider, where else? That’s what the amazing Dainese D-Air Thorax motorcycle airbag is all about. The company has thoroughly worked up the testing phases of the airbag and are ready to unleash it as a shield against motorbike fatalities. It is an extension to the ongoing D-Air Street Program. The initial versions of the airbag would only offer protection around the neck and shoulder areas of the rider. However, the airbags are now designed to protect the sternum and lower and lateral areas of the bikers rib cage as well. This, without doubt, increases the volume of the inflatable area. To deal with the same, the gas canister will also undergo an increase in size as compared to the previous rendition. The increase however is minimal. The suit will inflate in 45 milliseconds and will serve in absorbing about 85% of the impact force.


We can expect Dainese to introduce the D-Air Thorax technology in bike racing, a field that deals with maximum fatalities. The same can be adapted in the street level, most probably at a later stage. Users can also apply for a two-year maintenance subscription for a nominal fee, with a free replacement guarantee for the airbag and canister after each impact encounter.