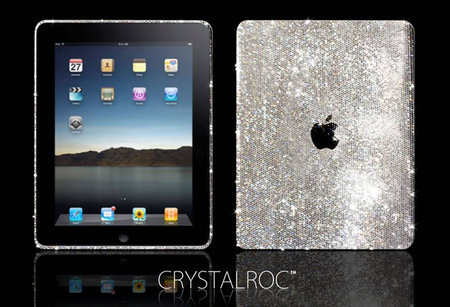 The moment a new sought-after gadget surfaces in the market, especially the ones that roll out of Apple’s doors, we see a rush to give them a bling makeover. The latest gadget that has wowed the Apple fans worldwide, iPad has already been given a facelift as the World’s first diamond studded iPad by Mervis Diamond Importers. However, $20,000 dazzling makeover for a $500 iPad is only affordable by the super-rich clan. CrystalRoc has come up with a Swarovski-studded version of iPad. Decked with more than 6000 crystals, it is the first of its kind. For £1500 ($2,250) consumers can purchase a 32 GB version directly from CrystalRoc by April-end. For 1/10th of the price of a diamond-studded iPad, you can still flaunt a glittery iPad up your sleeve.
Via – [Luxurylaunches]