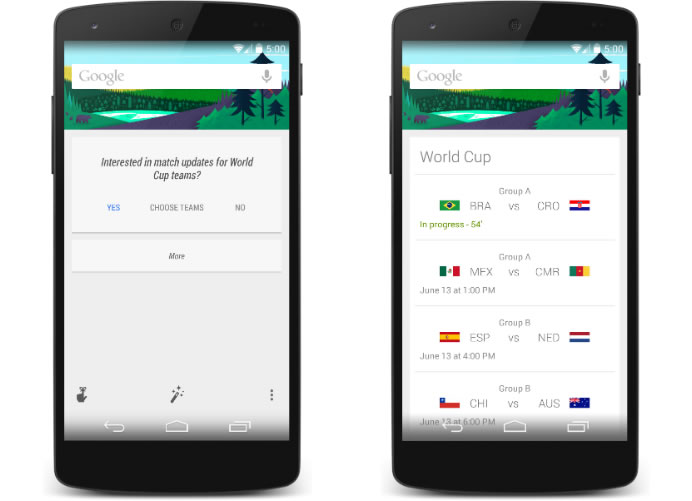 Cryptic screenshot tweets by Google point out at a possible Android 5.0 release soon

Google has plans for us all. Most recently, the search engine giant who has pretty much managed to capture a major part of the technology market, tweeted a simple screenshot of a new Google Now feature which displays World Cup info. This has led most of us to believe that Google will also soon unleash a new Android version, the Android 5.0! So why is this screenshot so cryptic and what made us imagine Google’s intentions? The answer lies in the time displayed in these screenshots. Google always translates the Android version to the pictured device’s clock every time an official screenshot is revealed. Simply put, screenshots of Android 4.4 displayed the time as 4:40 while Android 4.2 screenshots displayed 4:20.

In these screenshots, the clock reads 5:00, which is why the technology world has come to believe that the company now intends to unveil a new version of its popular operating system! The announcement could be made at the Google I/O later this month and we’ve kept our hopes right up there! It’s about time you Android fans cross your fingers and pray that Google comes up with something refreshingly new, to keep you from switching over to the Apple side.