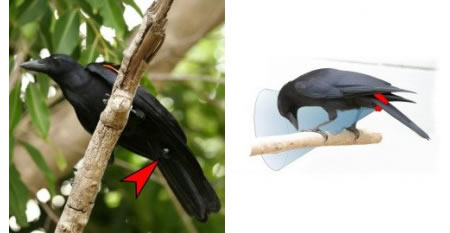 Crow Cams are watching all the time

The Behavioural Ecology Research Group has developed a camera that so small that it can fit into the tail of a Crow. Aptly called the Crow Cam, it is fitted into the two central tail feathers, with the lens bent forward peeking through the crow’s legs to provide a “crow’s-eye view” of the world! The camera has been designed to keep a track on the “natural foraging behavior” of birds like the wild crow or many other bird species that are shy, or live in inaccessible habitats. Apparently the researchers have discovered that the crow uses tools to probe into the soil. Reportedly they have used novel tool material – dry, grass-like stems. The researchers say that one crow actually carried a tool for a considerable distance (>100 m), signifying that crows may keep particularly ‘good’ tools for future use. The miniature video cameras weighs just 14g (bit heavier than a £1 coin) and the camera transmits live footage for 70 minutes, and is safely shed with natural moult.
(Video from the Crow cam after the jump)

Video tracking with Crow Cams has the potential to study the behavior and ecology of bird species, but being a geek I’m thinking of the possibilities of using it a surveillance system or something. Who knows, that crow outside your bathroom window, could actually be spying on you, and your not so flattering pictures being recorded elsewhere. Think about it!