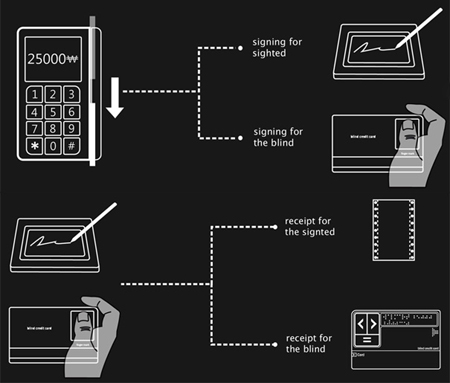 Credit card for the blind is yet a concept

Though we have great news for those who are visually impaired we miss out on the opportunity of seeing it shower its blessing on them. This is because the technology is still in its conceptual days. We hope that it spills out into the commercial arena so that it can benefit the visually challenged. The system uses a fingerprint recognition method to authenticate the user, rather than the usual signature. To ensure the card holder that the right amount has been debited from their account, the numbers will be displayed in Braille.

The idea is novel and does immense good for the blind that mostly face problems with currency notes, telling one from another.
[YankoDesign]