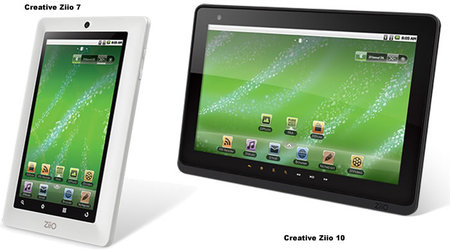 The world has gone tablet crazy as devices are coming out the whazoo right now. The latest to get on board the tablet bandwagon is Creative. An unlikely candidate considering their forte is the multimedia segment; then again, a tablet is pretty much a large PMP as well isn’t it. Their tablet range is going under a new branding called Ziio and two models the Ziio 7 and Ziio 10 (the numbers denote the size of the display, in case your not too tablet savvy) will be making their way out soon complete with X-Fi audio enhancement. Display resolutions will of course vary – the Ziio 7 will have an 800 x 480 pixel resolution and the larger model will feature 1024 x 600 pixels. Both will come with front facing cams which means, video calling (Yay!), HDMI out (double yay!) and 1080p video playback.

Internal memory would also be part of the deal 8GB model will be priced at $279 and $333. 16GB versions would also be available later on although release dates haven’t been mentioned. The OS version is still a mystery, but we’re expeting 2.2 by the time it gets launched.
[Ubergizmo]