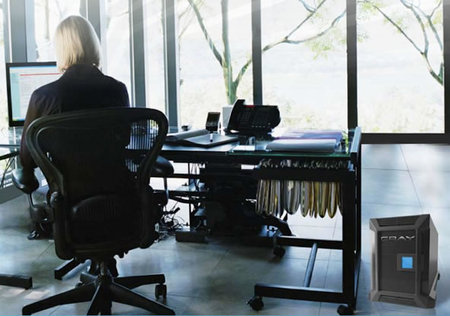 Think of supercomputers and you tend to think of multi-million dollar machines that easily take up a football field, with miles and miles of cabling and cooling systems running beneath the floors. That’s long been generally true, but not anymore. Cray has announced that it teamed up with Microsoft and Intel to produce a desktop supercomputer. Yes, it will sit on a desktop. In addition, maybe just as surprising, it has a starting price of US$25,000. The Cray CX1 supercomputer uses up to 8 nodes and 16 Intel Xeon processors — either dual-core or quad-core. It is the first Cray machine to use Intel processors. The CX1 has up to 4 terabytes of internal storage and 64GB of memory per node. The machine also comes pre-installed with Windows HPC Server 2008 and interoperates with Linux. Won’t all the other CIOs drool when you show off your datacenter? Dude, think of how fast Exchange will run on that puppy. No more worrying about the CEO complaining his Outlook is running too slow.

The Cray CX1 $25k price by comparison with the world’s most powerful supercomputer, the IBM-built Roadrunner, carries a price tag of approximately US$120 million. Run at the Los Alamos National Laboratory, the hybrid system runs AMD Opteron processors and Cell chips, and this summer sustained a speed of 1.026 quadrillion calculations per second.