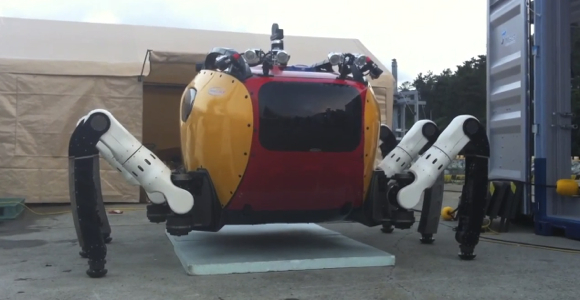 The ocean’s floor has for a long time been a source of real mystery for intrepid undersea explorers and technological advances in sub-ocean travel have been progressing steadily. In the latest effort to unearth the treasures of the deep a new robot has been designed for exploration aptly named the Crabster because of its crustacean like form. Although it looks more like a Bond villain’s escape module in some undersea adventure, the red and yellow Crabster hexapod robot is designed to bear the depths of the ocean floor without creating sediment clouds caused by regular propulsion based vehicles than can inhabit visibility.


The people down at the Korea Institute of Ocean Science and Technology (KIOST), have designed the Crabster to withstand heavy currents by changing its posture (roll, pitch, and yaw). The robot crustacean will be lowered to the ocean floor via a crane and an umbilical cord will be connected at all times to supply power to the various bits of equipment installed. This does limit it’s movements but also maintains a continuous power supply to the robot for longer stretches underwater. There is talk of incorporating an on board power source as well. There’s even a possibility that the next generation Crabster could have retractable legs and would able to swim around if need be. Check out concept video here –

The Crabster is controlled by four operators who manage its various cameras (10 in total), lights, sonar etc. The forward legs can also double to be used as arms to pick up and manipulate objects and a retractable tray on this half ton robot, can be used to store items recovered. The Crabster’s virgin voyage under the deep blue sea was conducted recently where it was lowered to a depth of about 200 meters below the surface. Check out the video below.