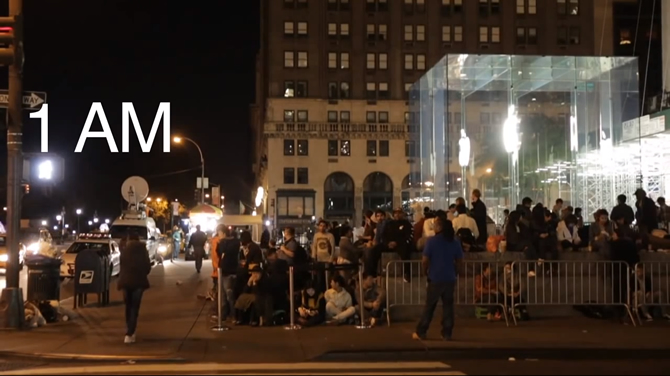 Could the long queues outsite Apple Stores be a gimmic?

Speculation is food for thought. So why should we hold our horses when we look at something as strange as unending queues outside stores, spanning fourteen days of waiting, camping, braving weather and even starving, all for the release of a smartphone? That’s what struck us first when we took a look at this heart-wrenching video of Apple fans standing patiently in line to lay their hands on the all new iPhone 5S. A lot of them do look well-groomed or tidily clad folk who have the right gear to get kicking on the reviews or even accept a payment to stand in queue. In fact, we have even heard of dozens of homeless people employed to populate the infamous wait outside the stores before the launch, by a strange gentleman who promised them money for their patience. It comes to mind that a typical geek who would really dig an Apple release (and is part of a diminishing population) would be there with sunken cheeks, dark circles under his eyes and untidy clothing!

Are all of these people in the video genuine Apple fans or do we have some significant fakes who are actually Apple-paid folk, looking to trade their time for some greens? Let us know.