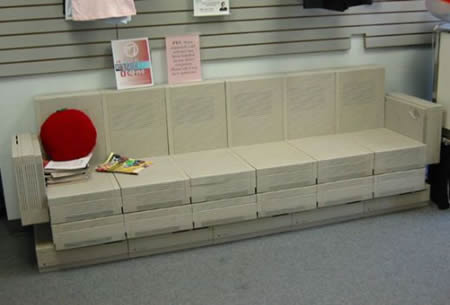 Recycling old peripherals is a good idea, especially if you add a dash of creativity to it. The Mac Store in Maryland Heights, Missouri had 20 Macintosh II computers lying around gathering dust. They decided to tinker around and make a (un) comfy couch out of it. The sturdy couch can take your weight because they were originally designed to hold a heavy 20-inch CRT on top. The couch is held together with drywall screws.

The Macintosh II computers couch is not for sale but for argument sake, if you consider this, the original top-of-the-line Mac II sold for around $5,500, when you work out the Math, the couch could cost over $100,000!
Source