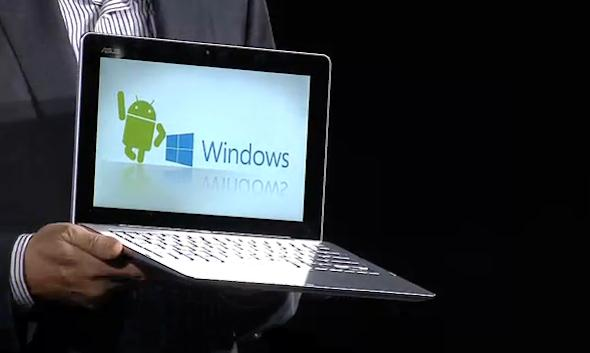 The ongoing Computex 2013 tech show in Taipei saw Taiwan’s two leading computer manufacturer unveil their new generation of hybrid laptops. Just a couple of weeks before the event IDC predicted shipments of PCs, which include both desktops and laptops, would fall by 7.8% over the course of 2013. The rate at which people are choosing tablets over PCs has got the manufacturers worried and the shift towards hybrids seems like a natural choice. The Transformer Book Trio announced by Asus was its major launch this week at the tech show.


The notebook touted as the world’s first three-in-one mobile device has a removable display that measures 11.6”, once it’s pulled out of the keyboard it acts like a tablet. What’s more interesting is that it’s loaded with two operating systems, it can flip between Android Jelly Bean 4.2 and Windows 8. The slate itself features a 2.0GHz Intel Atom Z2580 processor and an internal storage up to 64GB. A dedicated key lets the user change between the two different OS.

When in notebook mode it acts as a compact ultraportable with a full keyboard and a 1080p HD display. It can also be docked with a PC station that turns it into a desktop, in this mode it utilises the hardware stacked inside the station which includes a powerful 4th-gen Intel Core i7 and 750 GB of internal storage. It even has sports a connection port for external display and charges the slate when it’s docked-in. The pricing and availability hasn’t been disclosed by Asus but it’s expected to hit the markets by Q3 2013.