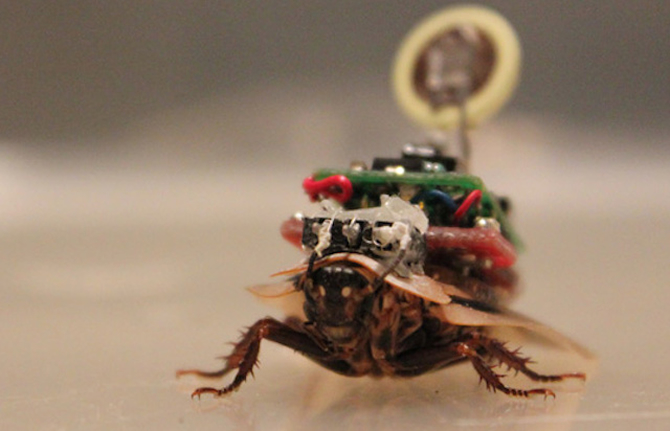 Movie, TV and comic book characters like Robocop, the T100 or T1000 Terminator and possibly the most famous of all Darth Vader, are a few of the names that are synonymous with machines combined with or designed to look humans aka cyborgs. Being a geek, I always thought the first commercially viable cyborg would also be ‘embodied’ in a human-like form, I couldn’t have been more wrong. As science would have it, the first commercially available cyborg that will be available for purchase will be a cockroach. The aptly named RoboRoach will make his debut soon with a price tag a cent shy of $100.


Backyard Brains is the proverbial ‘brain’ behind RoboRoach, the Bluetooth operated insect. Just like in the movies, a little surgery will be required to help ‘enhance’ the little insect who will be fitted with a little electronic backpack so it can be controlled. Using your mobile phone you can stimulate RoboRoach to move in various directions just like you would a remote control car. The founders of this tech say that the reason behind RoboRoach was to get people excited about the brain. But if Hollywood has taught us anything it’s that no being with a mind of its own can be controlled for too long and it’s only matter of time before they brake free of their controlled restraints and run wild. The same goes for the RoboRaoch cyborg that can also be controlled for only a definite period of time, a few minutes to be more precise. After that he’ll need to be returned to confinement before he learns the error of his ways. However, just like the movies, after a few days, you’ll pretty much have lost all control.

PETA is going to have a field day with this, and have already raised concerns about using animals that can be controlled by a mobile phone. But more importantly, can you imagine the chaos when we find out that we could be facing life in some post apocalyptic world that was overrun by cyborg roaches? It’s just too weird.