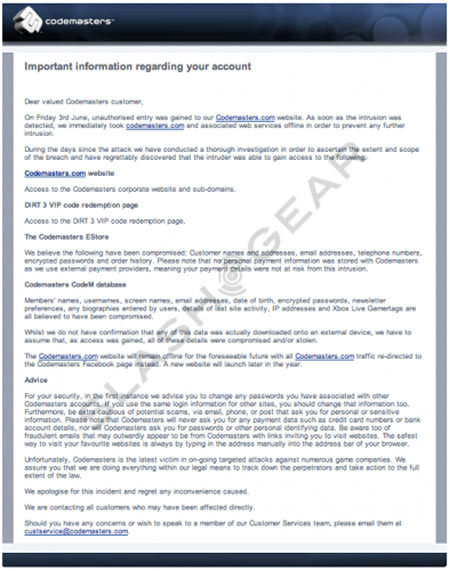 Off late, there have been a lot of websites hacks with serious repercussions. One would ordinarily expect that post a perilous hacking incident, properties will be made well fortified from any intrusion in future. Time and again, hackers have proved otherwise and Sony will have no choice but to agree with them. Well, this time it was games outfit Codemasters that was hacked for the second time with details of their customers leaking out. The company sent in an email notification to their customers saying that the attack took place on June 3rd.

The data siphoned off by attackers included names, addresses, e-mail addresses, telephone numbers, encrypted passwords, and order histories for users of Codemaster’s digital distribution service EStore. Along with this, User names, screen names, e-mail addresses, dates of birth, encrypted passwords, newsletter preferences, biographies, site activity details, IP addresses, and Xbox Live GamerTags were also compromised in the attack for members of Codemaster’s CodeM service.
The former attack happened just lst month where in some administrative user names were obtained. it is believed that probably the same details were used to launch this one although Codemasters haven’t confirmed this story yet. Their website will remain shut for a while now and all the traffic is being re-directed to the Facebook page instead.
[Slashgear]