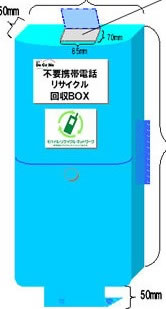 Well that’s the future of the cellphones in Japan! NTT Docomo and am/pm Japan are planning on stationing cellphone-recycling bins at convenience stores across Japan to help the population get rid of their redundant phones. Earlier the cellphone providers have been recycling the discarded phones in their own stores. But as the numbers are increasing, NTT is stepping in and hoping that cellphone users will make use of these recycling bins. The bins (that accept all makes and models) initially will be set up at eight convenience stores in central Tokyo. The bins have been designed to ensure that thieves don’t have a field day.