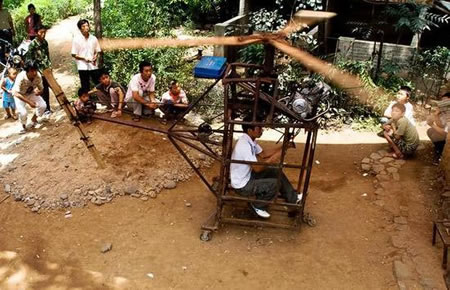 What isn’t possible by man should never be possible by chickens (save: laying eggs). That’s what I felt the first time I saw Chicken Run. The movie inspired me to take up something as a cause, building an aircraft with nothing but a few simple tricks in the bag and a little bit of theory. However, thanks to so many things that screwed my dreams up, I ended up getting tied up with them all and didn’t make my dreams come true. However, somewhere, around half the globe away, in distant china, a farmer made it possible. All he used was some basic tools and well memorized high school messages to bring forth a cool aircraft, which is supposed to be a very crude helicopter.

This helicopter has wings made of Elm tree wood and a frame that has steel pipes all over them. It uses a motorcycle engine and can scale heights of up to $1,600. However, thanks to the Chinese government, he is temporarily grounded.
[Dvice]