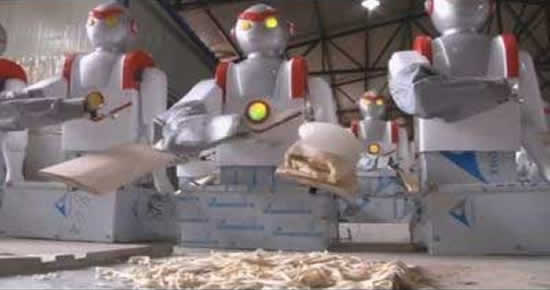 Chinese restaurants have a new cook in Chef Cui, a noodle-slicing robot

China is steadily moving towards robot waiters and robot chefs, latest to make rounds in Chinese restaurants is the Chef Cui. Brainchild of a Chinese restaurateur Cui Runguan, the Chef Cui is a noodle slicing robot, which slices noodles into the boiling pot. Pretty lame, but useful when it comes to saving labor costs and simplifying things at restaurants. The Chef Cui has become a common site in Chinese noodle shops and is now being mass produced for about $2,000 each. The cost that the Chef Cui saves a restaurateur a year can be simply calculated – average human noodle slicers takes away about $4700 in wage a year, while the robot is a onetime investment of $2000.


Revealed first time in March 2011, about 3000 of Chef Cui’s have already sold, perhaps not just because they are economical but also because they, in comparison to any human noodle slicer, slice noodles way too evenly, which are good to present and eat.