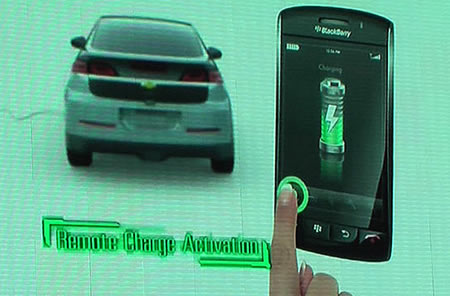 Chevy’s electric powered wonder car, Chevy Volt electro-carriage, that’s due to hit the lots sometime probably in the second half on next year, is going the way of the Mercedes and Beemers and pretty much all new cars coming off the line by offering interactivity with your mobile handset. That’s the new trend it seems with automobile manufacturers, to allow users to controls their vehicles in some way via their mobile phones. According to a few sites, the Volt is going to be very interactive with the iPhone as well as BlackBerry devices to being with and as time progresses apps for other devices will also be made available. Users will be able to tell how much the cars battery has been charged and even schedule charging right from their mobiles. I’m not sure if this makes the car more appealing or the mobile handsets.
[Dvice]