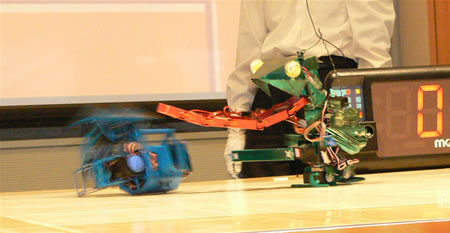 At the Kansai robot competition robo enthusiasts from all over Japan headed with their creations. When it came to 1 on 1 fights the most interesting was the Chameleon robot which is unlike any robot ever seen. It is powered by 5 servo motors and its long and heavy tongue is the center of gravity as well its primary weapon. When rolled out the tongue has enough power to knock out the opponent off its feet.
(Check out the fight after the jump)